Storytelling was a big thing when I was a kid. The internet was just getting started back in the early 1990s and generally it was used for research more than entertainment like it is today. I remember gathering a handful of friends in a rarely empty band room and exchanging scary stories together. It became a game of successfully creeping your friends out, and so each story upped the stakes.

She told us old folktales, stories that are pretty hard to find these days. Living in the South in the U.S., you get to hear all kinds of interesting, terrifying stories. This is one that used to creep me out, and usually got a shudder out of my friends. I’ve taken massive creative liberties with it of course, since the original is fairly sparse. It’s sometimes referred to as The Keyhole, and there are countless retellings of it. I’m happy to add mine to the pile.

The light drizzle turned into a downpour as I navigated my way through the poorly marked Georgia back roads. I cursed my grimy windshield as I barely turned in time to avoid plunging into a deep, muddy ditch. I knew I had to find a place to stop. I still had an hour before I reached my aunt’s house, and it was well past midnight. The rain was slowing me down and my exhaustion was catching up with me.

I grinned as the dimly lit motel sign came into view. It stood like a barely readable beacon amid the sheets of rain that fell from the dark skies. There was only one other car parked as I pulled in, and the parking lot was a muddy mess, but I hoped that the rooms were at least clean. I made a dash for the front door and braced myself as my shoes skid on the linoleum floor.

A curious receptionist poked his head around the corner, “Coming down pretty hard out there, isn’t it?”

I gave a nervous grin and shook out my hair. “Sure is. You have a room available?”

The man nodded and took my info down. He didn’t use a computer, just a large pad of paper that might have been used for drafting. He pulled an old fashioned key off the back wall marked 112 and handed it to me. I noticed he had skipped the one marked 111 and thought of the car parked outside.

“I guess I’m not the only person trying to get out of the rain tonight, am I?”

He gave a small smile but didn’t answer. “Your room is on the next floor up, the first room to your left.”

I nodded, figuring he was probably a bit tired himself considering the time, and went up to the next floor. I knew the building was older since they used heavy keys instead of the cards used by more upscale places. The steps were shorter too, which isn’t unusual in older buildings. I did have to take my heels off though as I padded up the stairs.

The carpet was ugly, but not terrible. It just looked dated, much like the cold key I held in my hand. As I made my way to my room, I passed room 111, where the other person was staying. I could see light from the old-fashioned keyhole, so I knew the person much be awake. I recalled the receptionist’s odd behavior and wondered what would keep someone up at this hour with the weather so terrible outside.

Regardless I entered my room and peeled off my wet clothes. The place was old but clean, and I stretched out on the bed, thinking to relax for just a moment. Instead I fell asleep.

When I awoke, the rain was coming down even harder outside. I could hear it beating against the window, but I could also hear a siren just above it. I was worried that someone had gotten injured, and in a sleepy haze, I crept to the window and peeked out the curtain. The parking lot was a flooded mess, but I saw no ambulance or any cause for the siren I heard wailing over the rain.

That’s when my sleepy brain realized that it wasn’t a siren, but a wail I heard. Someone was crying their heart out.

I pulled on my clothes from the day before, still cold and damp, and I went out into the hallway, intent on notifying the receptionist downstairs. That’s when I realized the wailing was coming from the room across the hall, room 111.

I gave a quick knock at the door, “Excuse me, but is everything alright?” The wailing turned into sniffling inside. I knocked again, “I could hear you from my room and wanted to make sure you were okay.”

Noticing that there was still a light emerging from the keyhole, I crouched down and peeked through. The room was very similar to mine, but faced the back of the motel. The curtains were thrown back and a woman sat on the end of the bed, her long black hair just sweeping along the bedspread. She dabbed at her eyes with a tissue. I knocked again, peeking down to the keyhole, but the woman didn’t move. 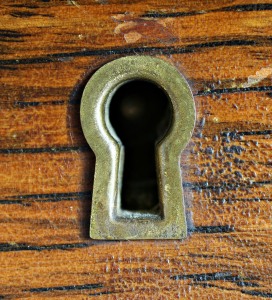 With a sigh, I went back to my room. This time I got ready for bed properly, then climbed under the covers. The room felt colder, and I worried for the sad woman in the next room. A thunderclap arched its way across the sky and the room flared with lightning. Somehow I found sleep again.

Morning came with the sun. The parking lot outside was still flooded, but it was dry enough to drive on. I stepped out into the hallway, and spotted the closed door to room 111. Concerned, I crouched down and peeked through the keyhole. I was hoping the poor woman hadn’t stayed awake all night. Instead of the room however, all I saw was bright red. She must have covered it up with a piece of clothing to keep anyone from spying on her. Still I couldn’t prevent a shudder from going through me, and forgetting to remove my heels, I almost tripped down the stairs.

The receptionist this morning was a smiling blonde woman. “Everything alright?” She asked with her thick accent.

“Yes, but I was wondering about the woman in room 111. I heard her crying last night and…”

The woman’s smile faded. “Are you sure it was that room?”

“Yes, I even saw her through the peephole last night. She seemed very upset.”

She pursed her lips and looked away from me as the words stumbled out. “That’s not possible. We never lend that room out. A woman killed herself in there, we call her the black-haired lady. Three housekeepers have tried to clean it, and all of them have run out screaming about her angry, red eyes.”