Last night I passed the finish line of 50,000 words. I validated my novel and picked up a couple of reward goodies. I’ve got to admit, there were plenty of times I didn’t think I was going to make it this month, especially after such a difficult start.

Here’s my progress chart. You can really see the hit I took that first week too, plus the lack of motivation that took place shortly afterwards. There were several times when I came oh so close to throwing my hands in the air. 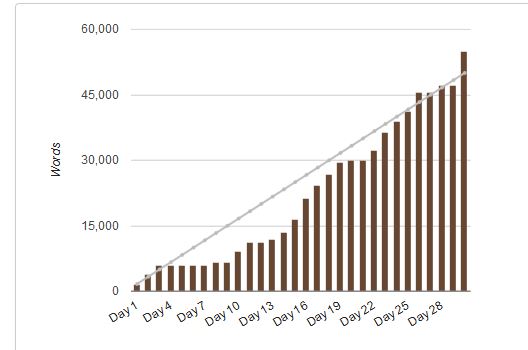 Instead I made myself be sociable and attended a few write-ins, and even though my word counts during those sessions weren’t that high, it gave me the boost of confidence I needed to continue. I didn’t expect that sort of thing to happen really. I kind of thought I would attend a few, then walk away from it; but the knowledge that I had to meet with folks who were working on the same deadline I was gave me some much needed peer pressure to finish.

So the novel isn’t done, but I am in the climactic final scenes. With all of the setting notes and background scenes (which won’t be included in the final novel), this beast is now over 100k. So I’m taking a guess that it’s really only around 90kish. At least, I hope so. I’m pretty minimalist on my first drafts, so I’m sure there are areas that need buffing up.

The final scenes of the book took a DRASTIC change from what I had outlined too, which is why it’s more difficult to put down words at this point. Lots of POV switches, lots of balancing out what character knows what, and lots of action going on. It’s a tad bit difficult to keep it all straight, and I’m sure there are several knots that need to be worked out, but I’m much happier with how this is ending compared to what I had before. I just couldn’t imagine Shaleigh getting dragged into a ball, nor could I imagine Madam Cloom throwing one after the craziness that happened in the scenes prior. But this unmarked path is freaking fun. Lovable (and not so lovable) side characters are getting the spot light and all their flaws are shining through. Colin, Mawr, Lieutenant Varg, and Captain Briar are all getting a lot more stuff to do; and more importantly, they’re staying in character for the most part. The plots in the background make more sense and the villains are even seeing more exposure with this path. There’s some tough work going on here, but it’s keeping me highly entertained.

Here’s the progress on my YA other-world fantasy novel about urban explorer Shaleigh Mallett who is whisked away to the Land of the Fae. Along the way she encounters living statues, friendly minotaurs, and a backstabbing ruler. When she gets tangled up in a love story that can’t possibly end well, Shaleigh finds herself forced to make a difficult choice that could change the future of this new land, and prevent her from ever getting home.

Progress: Battle has broken out everywhere as an unexpected enemy makes a drastic move. Shaleigh is pivotal to what happens next, but she doesn’t understand why, or what the consequences will be.

Next up: Bonds are broken, others are made, and some mistakes can never be forgotten.

Commentary: I caught up with my NaNo word count the day before Thanksgiving, which meant I could spend the day with family for the most part. Most of this catch-up time has been late at night to be honest. Quite happy with how this story is unfolding, and I’m excited to see all the pieces finally falling into place. Also getting some good ideas for Book 2.