Tomorrow is the big day: the start of April Camp NaNo, and I think I’m prepared.

I’ve been putting together all sorts of plot points and backgrounds over the last few days, some of which are way more detailed than I expected it to be. I’ve realized that this story has a few main inspirations:

Indeed I think this is the first full-length book I’ll have penned that does not include the horror genre. That’s quite a feat for me! Don’t worry though, there is definitely some creepy stuff going on in this piece, that will probably push to just the edge of terrifying. The world my protagonist will be falling into will be a far crueler place than our own, even if it is beautiful.

I’m tentatively labeling this book a YA Fantasy novel with a dystopian twist. We’ll see if that carries over into the actual book or not. I’m really stoked about getting started though, but I’ve somehow been able to hold myself back from diving in this weekend. Too bad Camp NaNo doesn’t start on a weekend!

Here’s an image that I think gives a few hints at what will be happening in this piece. Probably soon to be my wallpaper on this computer. 😉 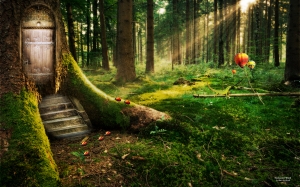