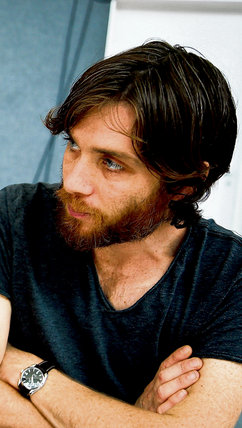 Cillian Murphy in rehearsals for Misterman

I’m a big fan of Cillian Murphy as an actor. If you don’t know who he is, then you may want to consider re-watching Batman Begins, or review his cameo in The Dark Knight, or marvel at his intensity in Red Eye. The types and multiples of films he’s been in is quite astonishing, and his skills as an actor really show when you can find a decent interview with him. He has a remarkable capacity for understanding people, a very good “people-watcher” as my mom would call it. One of my favorite aspects about him is his solid grip on the mentally unstable, the socially awkward, and those pushed to the limits (28 Days Later). He’s frequently choosing movies that many actors would shy away from, simply because he likes to be challenged. So you’ll also see him in transgender roles like Breakfast on Pluto or Peacock, but other times you’ll see him play the main hero, like in The Wind That Shakes the Barley – just to give you an idea of his versatility. It’s fair to say that Murphy knows a thing or two about acting.

Recently I came across an interview done with him in the Irish Times (found courtesy of The Cillian Site) where he talks about a play he’ll be appearing in over the next few weeks in New York, Misterman. Further down in the dialogue he goes into a bit of detail about working on plays compared with working on movies, discusses various directors, and then starts going into detail on how he dissects a role.

… Murphy is a self-confessed research freak. Before he shot Sunshine with Danny Boyle, he spent a lot of time shadowing the physicist Brian Cox. He even visited the Large Hadron Collider at Cern in Switzerland, not so much to get a sense of the physics as to get under the skins of the people who work there.

“I spent so much time with him I ended up playing a version of him in the film,” he says, admitting with a rueful laugh that science and maths have never really been his thing. “But film is the art of illusion, really, isn’t it? If you look like you know what you’re doing, people will buy it.”

Any writer will tell you it’s important to get “under the skin” of your characters, to become familiar in some way with the world you build: whether that means spending all day researching private detectives of the 1930s or reading up on dragon lore, research is a necessity of any art. Insight is another – and being able to see through the layers of a character, real or fictitious, makes for a stronger story, and definitely a more enjoyable story. Murphy has some interesting points on this as well:

“For people who live on the periphery of society, or people who live under intense pressure or have behavioural issues, to them it’s quite normal,” he says. “So I think you just try to normalise it, really. Of course with any character, in my opinion, they won’t exist or connect or people won’t invest in them unless they have some sort of humanity.

How true this is. If your audience can’t in some way connect with your character, whether out of sympathy for their actions or understanding of their plight, then some indescribable bit of life will be absent from your story. There will be some nameless quality missing, and you can bet your audience will recognize it. Another observation that he made was quite interesting:

I’m a bit more on the fence as to whether this applies to authors as well as actors. After all an actor is playing the role in the story, and usually has limited control over moral perspectives. It is difficult not to judge a fictitious child killer morally, for example, but an actor must try to be neutral in their portrayal.

"A cardboard cutout of a villain that ties women to train tracks while laughing maniacally."

The author on the other hand has to carefully control the moral pendulum in their work. They have to know when to turn it on and shut it off. Sure the fictitious child killer may be a crazy, dangerous psycho, but the author has to understand his/her reasoning for it, and portray it appropriately. The villain, or any character for that matter, must resonate with the audience on some level. Failing to do the proper research as Murphy puts it can make your character come off like a cardboard cutout of a villain that ties women to train tracks while laughing maniacally. Unless this is your intention, you have to take strides to turn that character into a living, breathing person on the page. Cardboard cutout characters never exist in the real world.

Even though actors and writers don’t work in the same medium, we’re all doing roleplay. Sometimes insight can come in the most unexpected places.

5 thoughts on “Adding a Spark of Life to Your Villain”