Holy cow, I knew it had been a while since I had posted a book review, but I didn’t realize it had been since August, you guys. Oops! I guess you can tell I’ve been balancing a bunch of projects lately. Expect to see several posts over the next few days as I catch up!

I checked this book out from the library on a whim, trying to find a book to read that was light, but still interesting. I wanted to find a book I could learn something from. Writing fiction all the time means I sometimes have to be picky with how engrossed I get into fiction books. I’m always afraid I’ll fall into someone else’s story and world and have trouble crawling back out again.

I really enjoyed this book! I learned quite a lot from it and found it inspired me to get outdoors more. Even though it’s a few years old, the examples of lush cities, nature bathing, and using nature to treat PTSD were still just as relevant and eye-opening.

What caused me to knock off a star was the occasional negative tone the book would take. It didn’t happen very often, and for most readers it probably wouldn’t bother them like it did me. However the narrator at times was just so pessimistic and almost insulting occasionally. For someone who was a world traveler I was shocked by some of the phrases that were supposed to be quirky but weren’t.

However if you’re looking for a book to motivate you to head into the forests for a weekend, or want to learn more about how nature influences the mind and body, this is a great read! Just prepare yourself for the few weird anecdotes and occasional tone shifts.

Do you ever sit around and wonder what kind of mascot or spirit animal I would choose?

No? Well why on Earth not??

I’ll give you a hint: it probably isn’t the animal you’re expecting.

To find out, you’ll need to head on over to JoBookLove and check out the interview I did! I talk about my writing process, how I deal with book reviews, and the most important question of all, what I consider my spirit animal.

Interview with Marlena Frank by JoBookLove

Yesterday R. Michael made a post, Blogging Lessons and Woes, about how it’s important as an author to write outside of your comfort zone. In his case, he was very referring to blogging. After a year of having his blog, he was shocked at how much he appreciated it. I’ve run this blog for almost six years now, and I can easily admit that it gets difficult figuring out what to blog about. (Doing the Blogging University challenge this month has helped, but more on that in another post.) I’ve come to accept that blogging is always going to be a challenge, but I’ve also learned there are far much more uncomfortable subjects to write about.

I’m a nature lover. As a kid I dreamed of growing up to be a veterinarian. I follow The Cornell Lab’s awesome newsletter, getting info on fun topics like how to build proper bird houses and where to place them in your yard. So you can imagine my surprise when I saw, nested in the comments, someone detail how they get rid of House Sparrows which are apparently considered pests in certain areas. Not only did they detail the method, but they also gave an estimate of how many birds they had disposed of over the past two years.

I was horrified but, being a writer, I wanted to know more. I live in the U.S. South, so I understand how overpopulation can become an issue. That’s why we have deer hunting season after all, and even though deer are my favorite animals, I understand how they can take over a place if left unchecked. I soon stumbled upon control methods for crows, using a disturbing but ingenious cage. I found out that they’re difficult to deal with because they’re just so darn intelligent.

I don’t have time to scroll through all 2768 comments at the moment but I have lived, treeplanting, in the woods with ravens on Queen Charlotte Islands, Canada and this simple test is nothing compared to the ravens stealing my lunch. Pardon me, my third lunch in three days.   Opening my click locks, then opening the zipper then pulling out the tupperware and getting the duct tape off of it to open it and then eating my sandwich. THEN flying by me on the side of a mountain to caw at me!!! Did I mention the cedar sticks and large boulders I put on the knapsack within which this prize was hidden? This was the third lunch they stole from me and after that I LEARNED to just leave them a freebie on the ground and they’d leave me my lunch.  I still shake my fist every time I see a crow. They are brilliant.

It’s amazing to me that we spend so much energy trying to capture and dispose of nuisance animals when sometimes we might be better off learning to live with them.

So yes, the story was very difficult to write and I’m pretty sure I was frowning the entire time I wrote it. However I think my disgust only made the story better. It took longer to write since I was putting so much energy into it. I challenged myself in a way I hadn’t done before, and I think the writing benefits from it. Of course, you’ll have to read it for yourself and let me know!

“Tiny Necks” is set to be released in Not Your Average Monster Volume 2  by Bloodshot Books on February 29th, but should be up for pre-order earlier than that.

Camp NaNo is off to a great start, even if I am a thousand words behind right now. This month I’m working on writing four short stories, all weird horror pieces. I wrote back in March about some story ideas that I had, but looking back on them, I haven’t used a single one. That said, all of these had a loose to detailed outline to go along with them. I’ll give their tentative titles below and a bit of research I had to do for each of them.

So there are my plans so far! I’ve got some catching up to do still, but I doubt I’m the only one. With a total monthly goal of 20k words, I think it’s completely do-able.

Today is International Tiger Day, so I thought I needed to give a shout-out to some of my favorite animals. First and foremost, let’s get the adorable pictures out of the way.

Adorable doesn’t even begin to describe this cub.

Not enough cuteness for you? Then I recommend you head over to Mother Jones and check out their whole page dedicated to the beautiful creatures. Don’t worry, I’ll wait until you get back. Got to get the Aww! out of your system after all. 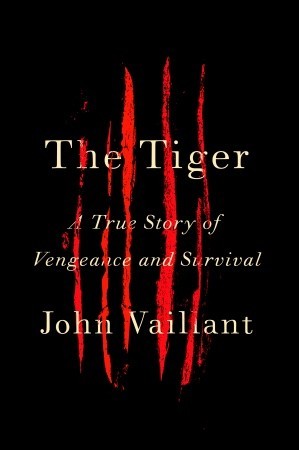 Now if you want to read more about Siberian tigers, I recommend checking out The Tiger: A True Story of Vengeance and Survival by John Vaillant. I listened to this book on audio last year, checked out for free from my library, and I have to say it was an intense listen. For me at least, the audio book helped because listening to how the names were pronounced helped me to have more of a distinction for the characters. Check out a snippet of my review of the book:

The tiger is revered, feared, compartmentalized, and idealized. There is a main story, but mixed throughout are backgrounds for the various people whose lives were affected, as well as fascinating tales of the various tigers that our main forest ranger has encountered.

I learned a lot about Russian history and its economy in this book, as well as all the temperamental relations that have existed in the past with her neighbors. The book is also peppered with adventurous tiger stories (besides the primary tale), even from a few survivors, and you learn how intelligent, territorial, and vengeful these animals are. These sections were by far my favorite parts of the book, and made for some entertaining discussions around the dinner table.

As frustrating as the structure was at times, listening to it in audiobook format made the Russian names, terms, and locales easier to understand and I didn’t feel daunted by the language as much as I think I would have been had I read this in paper/ebook format.

Overall a fascinating book about a beautiful but dangerous predator.

Another good source for information on not only the Siberian tiger but also the people of the Taiga is the documentary titled Happy People (available on Netflix), which walks you through a regular working day for people who live among the largest land man-eaters on the planet. You really get a good taste for the environment in Vaillant’s The Tiger, but it really hits home to see the reality of it. Not only do you see how they have to create makeshift traps in the woods but you also watch them make their own boats, all using the simple but reliable tools at their disposal.

Finally I’d like to leave you with some excellent places that work with tigers on a regular basis.