Over the weekend, I was amazed and humbled to reach 1,000 followers on Instagram! I was so thrilled and instantly I knew I wanted to find a way to give back to my readers. Then I remembered this fun, quirky tale.

This story was originally published by Zharmae Publishing Press back in 2013. I go into more details about what happened on my Facebook Moonlight Wanderers group and on my mailing list, but basically the rights all reverted back to me in 2016. Since then, this story has been functionally out of print, and I thought it would be wonderful to make it available once again!

I’m happy to announce that The Mysterious Disappearance of Charlene Kerringer is now available to pre-order as a standalone ebook on Amazon! The story officially releases on Friday, November 29th and if you love film noir and fantasy creatures, I think you’ll enjoy this one!

Some dames are nothing but trouble.

Detective Harris is a private detective who is out of luck and out of cash. When a woman walks into his office in tears, he decides to take a gamble on what he assumes is an open and shut case. What he doesn’t realize is that nothing about this case is normal.

This short story was a semi-finalist in The Zharmae Publishing Press’ Spring 2012 Writer’s Competition.

Really it was excellent news to hear when I got back from vacation! To be fair, it looks like it got posted before we left, but I blame a whirlwind of activity (ie. work, last minute packing, boarding cats, etc.) for distracting me from the Ebook release of my short story, The Mysterious Disappearance of Charlene Kerringer. You can now pick it up exclusively on Kindle at $1.99. Just click on the big blue cover on the right.

If you’re more interested in anthologies than the single varieties, you can still pick up a copy of RealLies with all of its gorgeous cover artwork, available at Amazon, Barnes and Noble, or even from Zharmae directly.

But the awesome news just keeps on coming.

On top of this, I found out that over at The A P Book Club, run by two friends who are total book lovers, they recently posted a review of RealLies. Ashley even went through and gave individual reviews for each short story, and had some kind words to say about Charlene’s tale.

While it starts out like your typical detective story, it soon takes a sudden turn in a completely unexpected direction. Things get weird, but I actually enjoyed where they ended up.
– Ashley

If you would like to take a look at their full reviews, Ashley broke hers up into two parts. Paul also wrote a review, but didn’t include my story. It really is difficult to review every story in an anthology though. There are so many! Take a look at what they said, and also browse through their impressive review listing that stretches from My Little Pony and Transformers Prime to Two Boys Kissing and Skulk.

I guess it’s time to dive back into edits again. Doing some major changes on my Supernatural Western novel. Although I’m hoping to participate in NaNo in November, I’m thinking I might be stuck with edits instead of writing. Edits are supposed to be even more important than just producing though, right?

The copy is much bigger in print than I thought it would be! I have to say that the page quality is excellent too, in fact the whole print job is wonderful. It did take a while for it to show up when I purchased it from Amazon, but it was definitely worth the wait!

And a close up of the cover. Took a bit to not get any glare. 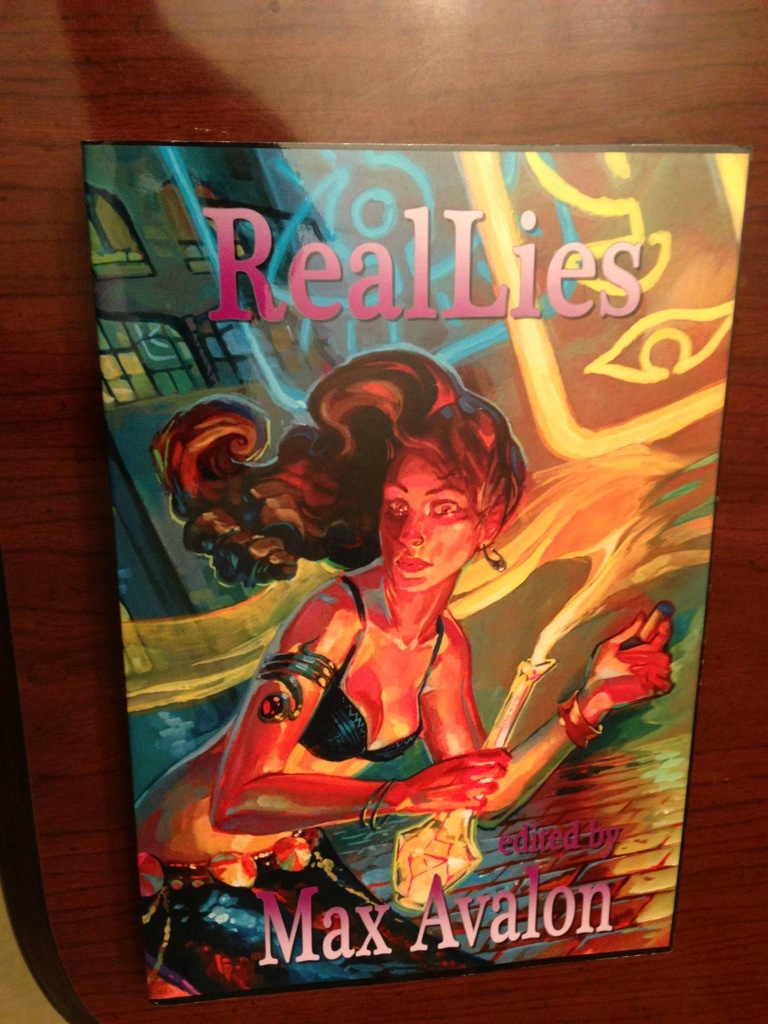 When I last looked, they didn’t have any more copies available on Amazon, but they’ll probably be ordering more. For links on how to get a copy, click on the picture to the right.

I had been looking for a copy of this since it came out in November, but I wouldn’t just deal with whatever version happened to be at the local Wal-Mart. I was rather peeved when they carried two versions of the DVD copy, but no Blu-ray. One version had the Catwoman short and the other one didn’t – and the only difference in price was $2-$3, a marketing decision I just don’t understand. I get having a Blu-ray and a DVD version, just not having two separate DVD versions.  I guess a couple of dollars makes a big difference in this tough economy though.

Let me just start by saying that I’ve loved Batman: Year One for quite some time. I think I first read it back in the mid-nineties when I was in junior high and was eating up the Batman universe. Sure, I had been loving this universe for quite some time, but that was my peak-fandom era I would say. We would go through every summer and catalog our comics, making sure each had the proper type of bag and backer board if we could. Let me add though that reading this epic graphic novel is not a prerequisite to enjoy this film. They worked extra hard to get the look and feel just right, and the gritty glamour of Gotham City is on stage throughout the film.

This graphic novel was one of Batman’s best forays into film noir, in my opinion. As one of the commentators in the extra features explained, this story isn’t just about the beginning of Batman, but about Commissioner Gordon’s first steps in Gotham. It’s as much his origin story as the Caped Crusaders, and he feels like the underdog in his dogged fight against corruption within the very police force he’s been transferred into. The voiceovers are dark and succinct, perfect for a film noir piece. Frank Miller’s caustic ambivalence and hopelessness carries over quite well from comic to screen.

The camera shots and angles felt like they were pane-by-pane along with the comic – and they follow the action beautifully. There is no shaky-cam like what is seen on many modern films, or delayed shots that don’t quite keep up with the action. The audience can follow every step of the way as an amateur Batman struggles to survive in a city that’s been given orders to kill.

I’ve got to take a moment though to compliment this film on including one of my favorite scenes though. In the comics, there’s a shot with Jim Gordon and Detective Essen sitting in a diner late at night, which shares a striking resemblance to Hopper’s “Nighthawks”. They didn’t have to keep this shot in the film, but I absolutely love it that they did. It’s a testament to how much this film embodies the graphic novel. Here are a few shots from the comic followed by Hopper’s original “Nighthawks”, just to show the resemblance. Don’t you love how it’s even labeled Hopper?

The reason I love this so much is because Hopper’s paintings, and especially his “Nighthawks” piece, are known for their melancholic appeal. They’re known for solitary figures in areas that are usually busy and bustling, typically in city environments. Hopper’s paintings always epitomized to me the soul of Gotham, the loneliness, the desperate hope for a connection (as is the case with Gordon and Essen above), and in a way is the essential film noir accompaniment.*

Batman: Year One in short got all the parts right that I was hoping for, and then some. If you’ve never read the comic but love film noir, or just love a raw and vicious version of Batman, then I think you’ll love the film. This was the inspiration for the look and feel of both Batman Begins and The Dark Knight after all, so that ought to be reason enough to go pick up a copy. Without this piece, Batman would never have been made so realistic and down-to-earth as he is in these films. Oh and did I mention it’s also on Netflix?

Now if only the DCAU creators would consider doing “The Long Halloween”, “Dark Victory”, or maybe some villain origin stories like “Scarecrow: Year One” – it would certainly make me a very happy Bat-fan. Come to think of it, seeing “Arkham Asylum” put to film would just be divine, if not downright creepy!

So what would you like to see the DCAU creators put to film next? Mark Hamill has said several times that he would come out of retirement to do “The Killing Joke”. I for one would add that to my movie shelf without hesitation!

* There’s some interesting critique for Hopper’s work that I referenced a while back. If you want to read a bit more about his style of work, I recommend checking it out.