I don’t know about you, but it felt like spring took forever to get here. Then last week, the final week of winter, suddenly our temperatures were so warm! I went to my car after work one day to find it was 90 (32 ºC) degrees inside. Of course with the warm temperatures came the sea of pollen. 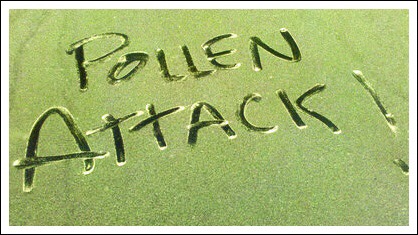 They say that if you don’t have allergies when you first come to Georgia, you’ll probably have them in 2-3 years. It’s not surprising either when you find out how bad pollen season is. (Pollen Season Starting Early This Year) It’s even worse if you have allergies and asthma like I do. You have to do regular inventories to make sure you’ve got the tools you need on hand and increase your medication to stay healthy. Otherwise you end up with regular sinus infections that can turn much worse.

If memory serves me right, we got our two Redbud trees the year after we moved into our house, so that would be in 2010. My younger sister offered to pick up a couple of trees from City Hall because they were being given away for free on Arbor Day. She got a tree for herself too, but a neighbor mowed over it thinking it was a weed. (How do you even do that?)

The first few years we had them, I don’t recall seeing any real flowers on them. There were maybe a handful before the leaves came in, then they were gone before you could even notice them. This year they’re simply beautiful.

For lovely shots like this I’ll gladly deal with all that pollen!

Headaches are never fun. It doesn’t matter what age you’re at either, they’re always annoying. Sinus headaches are devious little guys too. They’ll sit around your brow right around your eyes just causing dull aches and minor pains until you’re in a sour mood and you’re not sure why. Migranes are far worse, I’ll concede, but at least if you know what triggers them, you can try to prevent them. Sinus headaches aren’t nearly as predictable.

One minute you’ll be reclining watching a movie, and when you get to your feet to get something to drink, suddenly the whole side of your cranium is throbbing. Only one side of course, because sinus headaches are annoying like that. You reach down to pick something off the floor? Headaches. You pet a cat that is begging for attention? Headaches. Part of your day may be painless, wondering if you were just stressed out, or if it’s due to your glasses prescription, and maybe you’re not really all that bad off. In a few hours, your head is throbbing again, and you realize your sinuses are indeed the true culprit.

I had a biology teacher a few years back, a quiet man who had a surprisingly high-pitched voice and spoke to our giant lecture hall with as much enthusiasm about plants as a sports announcer does about the latest football game. “If you’re new to Atlanta, and you’re not allergic to anything yet, just wait.” He’d smile behind the podium, “Give yourself a year and you’ll be allergic to something. Georgia’s bad about that.”

It’s the weather. We get warm, moist air all the time, and plants love it. Trees, grass, everything I’m allergic too explodes with pollen. It doesn’t matter what time of year it is either. Certain grasses have different pollen times than others, and it’s the same for trees and weeds. In other words, my sinuses don’t have a chance.

So sorry if I haven’t been the biggest poster this last week or so, I’ve been trying to decide if I needed to go to the doctor or not, and finally realized I needed to. Now I’m on a slew of meds, and hopefully will be getting back into my writing again soon. I got the parts for my new desktop PC, and had a friend help me swap out parts yesterday. Sure I have plenty of programs to install still, but it’s incredibly faster than my old PC (and just as heavy). Something to look forward to while I nurse my headache for the rest of the day.

Andrei, when he was able to relax

The last few days have been kind of weird, which is mostly why I haven’t been updating more frequently up here. Saturday was a sad day for everybody cause we had to put one of our kitties down. Andrei was well over 10 years old, and never quite seemed the same after he had his ‘accident’. We’re not quite sure what happened exactly since we weren’t home at the time, and for a full day he just laid in one spot. When he stood up he was shaky, and although the vet said he’d passed a kidney stone, we think there must have been more to it – a stroke or something. After that he couldn’t see very well, couldn’t hear very well, and always walked in circles. In the same direction. Indeed if he wasn’t asleep he was endlessly walking in circles until he wore himself out. Needless to say, he had no interest in finding the litter box and barely seemed to know us anymore. His only joys were the fireplace and wet kitty food.

He’d been like this for a full year, with us making numerous visits to the vet, and each time they couldn’t figure out what was wrong with him. In the end, he was getting even worse by tracking his feces around the carpet and then promptly stepping in his food. We were worried he’d get not only himself sick, but his 3 year old kitty companion Salem. This was a very difficult decision for everybody involved. I’d never had to make a schedule with the vet for euthanasia before, and kept strong for my sister all the way to the end. I admit it’s going to be some time for me to remember him as the cute kitty that loved climbing into sinks to sleep and not the kitty that walked endlessly in circles, but I think it’ll get easier.

We’d been expecting this for a year as I said, even though the act of doing it felt like a punch to the gut. The next day we went down to Petsmart and picked up a new kitty that needed a nice home. He’s perhaps the most lovable cat I’ve seen, and was amazed when we got him home and he just wanted love. He’s so grateful to have a place to live and no longer be kept in a cage. Apparently he’d been up there for three weeks without getting adopted, which is never good.

So lots of emotional turmoil lately, but with a new beginning. I guess it all works out in the end, right?

In more lighthearted news, I’m going to start getting allergy shots soon. Last year I found out I was allergic to everything from grass to trees, dust, cats (even though I’ve always owned two!), and slightly to milk. The milk was surprising too since I used to drink a glass of it a day as a kid. Lately I’ve been more a fan of soy milk anyway, but still. I admit I’m a bit nervous, shots are never fun, but weekly shots (eventually monthly shots as my body adapts) sounds even less fun. Anybody had a good experience with these before? Know any good tips?

I think it’s 2-4 years worth of weekly to monthly shots, so it’s definitely a commitment to start them. The allergist told me it would help my asthma too since he thinks that’s brought on by my allergies. Still not looking forward to it though!