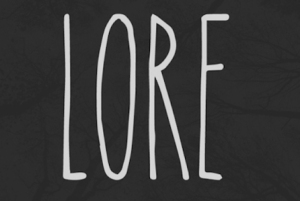 I’ve been a long-time listener of the podcast series Lore. I forget how I first found out about it. My friends know that I write horror and that I love dark tales, so when I ended up having multiple close friends recommend it, I decided to check it out. Basically Aaron Mahnke will choose a particular topic or theme, and then explore it by beautifully mixing tales with history, and analyzing the topic with respect for the time periods he’s analyzing. He’s tackled changelings, werewolves, vampires, etc.

I was thrilled to hear it was going to get a series on Amazon, but I tried not to get my hopes up. The podcast series was great, but I wasn’t sure how well it could be transferred to a video series. I’m happy to say that after spending the last week watching all the episodes available, that my fears were mistaken. In fact, I would even say that the visuals add so much to the words that Mahnke puts to the episodes.

They do historical reenactments, portraying terrifying experiences and really making the viewer experience the same frightening beliefs that their characters do. Sometimes this gets to be very uncomfortable, especially since historically women were powerless or seen as property and therefore are truly at the whims of the people around them, no matter how disturbing their beliefs. They are also able to pull in historical scenes more often too, whether that’s through video clips that are available or historical documents that really bring the stories home. The series also doesn’t shy away from blood and gore, but they do switch to illustrations whenever they go to portray a gruesome scene, thereby showing the gore just as clearly but taking away the potential production costs.

And that artwork is simply gorgeous. The werewolf episode for example just had me giddy as a long-time werewolf lover. The art style changes each episode to better reflect the topic for the episode. It feels organic and fluid and matches beautifully with the topic of the episode. It reminds me of the switch to animation that you see in Kill Bill Volume 1, which I loved then and I still love now.

My only complaint is that the series was too short, though considering the podcast has over a hundred episodes, I think they have plenty to work with down the road.

2 thoughts on “My Love of Lore”