Everybody likes charts and graphs, right? Well I just finished with Camp NaNo today, a whole five days before the deadline even!

This NaNo win was brought to you by a heaping helping of Earl Grey, Green Tea, and Oreos. Er, probably too many oreos in fact.

For this month I decided to try to write four short stories in a month, at around 5,000 words per story, or roughly 5,000 words a week. For somebody who usually spends a lot more time to squeak out a story, this was a challenge. The theme: all weird horror tales. It was actually a ton of fun too. 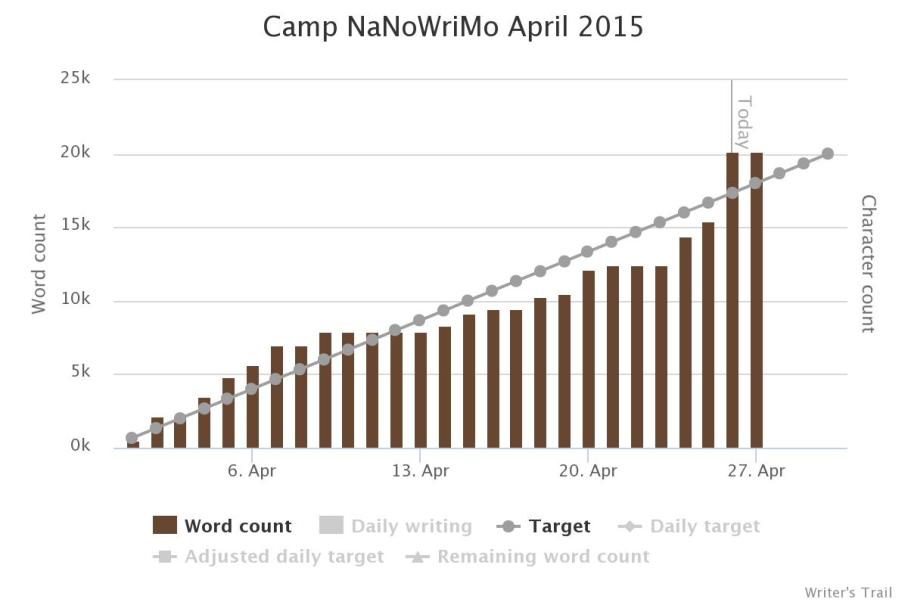 Here are the stats on each story, and a short blurb on what they were about.

Basically all about the dangers of ordering weird stuff online, especially edible weird stuff. Ultimately I’m hoping to try this over at Weird Ales, but it’s going to need some cleaning up first. Here are the stats though (courtesy of Writer’s Trail which I believe is still in Beta). 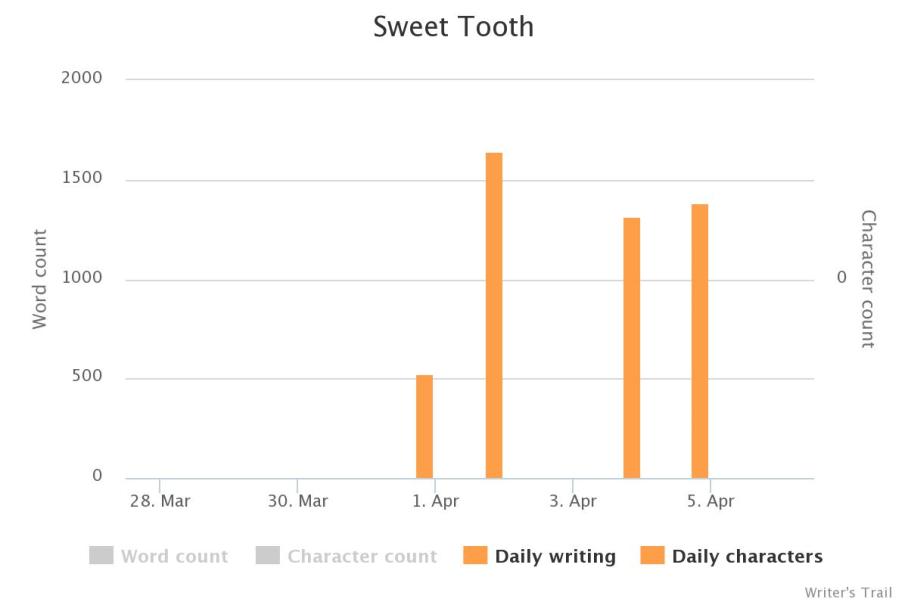 It was the first story I did, and I kept up a pretty good pace on it for the most part. At this point I was still very much on track!

The premise I used here was: what if a woman gave you a baby and told you to keep it safe? Only you find out that it isn’t the woman’s baby, and in fact she stole it from someone else? Our poor college student protagonist is put into a very uncomfortable situation.

I was able to keep a good pace during this piece too for the most part. As luck would have it, I was feeling pretty confident up to this point as well. Two stories down, two to go – what could possibly go wrong? Then story #3 came along…

I knew I was going to have problems with this story to begin with. On an earlier post, I talked about the kind of research I needed to do when I was writing these stories, and this one was more difficult emotionally. I’m a bird-watcher and a geek about wildlife in general, so having to find out all the ways that people catch and control crows was a painful process. It certainly gave me new appreciation for the variety of birds that thrive in my backyard. Ironically the inspiration for this story came from the comments of a Cornell Lab article, which strives to educate bird lovers on things like feeder placement, bird house construction, etc. So you can imagine the uproar when someone described the best way to catch house sparrows and snap their necks…

Anyway, this inspired this difficult to write weird horror story, and send me down paths on the internet that I would normally avoid. Of course, they do say it’s good to try to get out of your comfort zone occasionally in your writing, so I feel like I succeeded there.

You see how little I eked out on those days? Three hundred here, only a measly hundred there… it was like the words just didn’t want to come!

My protagonist in this piece is a jerk, and it was so hard to write about him to begin with. I’m still not entirely pleased with how he’s turned out in places, and I’m certain I’ll need to do some heavy editing down the road, but at least it’s finished. You can certainly see the way it took off toward the end as the suspense mounted, but it was an uphill battle getting there.

Of all the stories that I wrote this month, this one I kind of considered my baby. I talked about what inspired back in my research post, but I’ve been bouncing ideas around on this tale for quite some time and it shows. Basically it’s about a teacher who loses a student in a mirror, and she has to get him back. 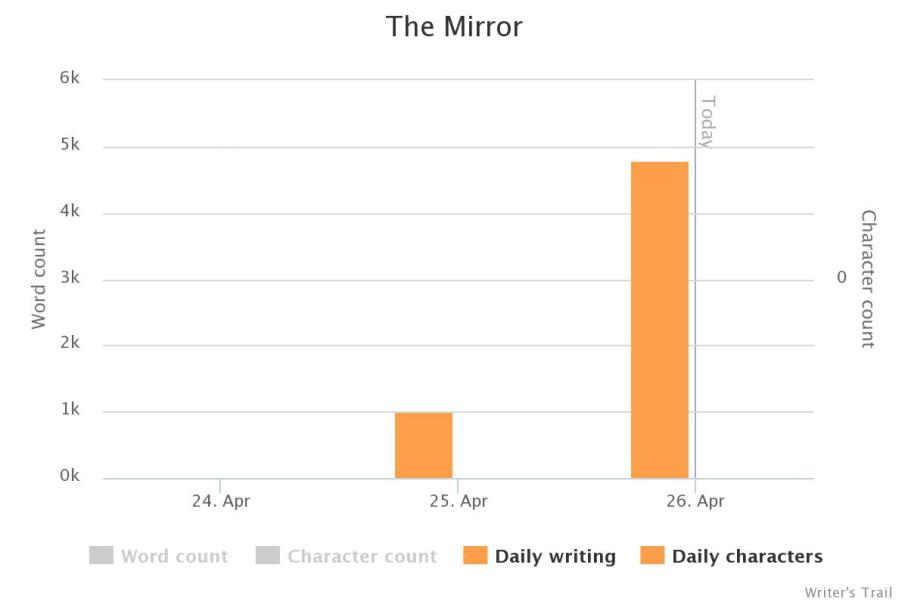 I wrote this in a whopping two days. I still don’t quite know how I did it. I can’t tell you the last time I wrote almost 5,000 words in one day, but I was floored that I was able to do it on a short story. The weird world that this feeds from is based on a place in an in-progress novel, so I felt like I had a lot of it already worked out in my head. I felt like I had a good amount of background to work from on the complex antagonist of the tale, which made the words slide along. Plus describing the creatures in this piece were crazy fun. Either way, I’m stoked that this was the tale I got to end on. If I had Thirteen Birds as my final story, I doubt I would have NaNo completed so early.

Needless to say, a lot of these titles will be changed before publication, and a lot of the numbers will change, but I thought you all would enjoy seeing the awesome word production (or less-than-awesome) over the past few weeks. I’m not ready to start shipping stories around yet, but I’ve got high hopes for this set. Here’s hoping I still feel so good about them when I pull out my editing chainsaw. 😉